The Red Savina stayed for 12 years on top. Nowadays champions only stay for short periods on top. But defeating the new champion, the Trinidad Scorpion Moruga, will take some time. Or not?

Hot sauce manufacturers wanted to be sure. Which chili pepper is the hottest?

The New Mexico State University's Chile Pepper Institute planted 125 plants of the Trinidad Scorpion, 7-pot, Chocolate 7-pot and the Bhut Jolokia to know for sure which one is the hottest. 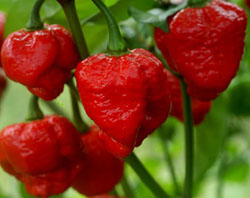 The average number of Scoville Units in the Trinidad Scorpion Moruga was 1,2 million with some chili pods even measuring 2,009,231 million Scoville Units. The new champion has arrived!

"You take a bite and it seems not too bad," said Paul Bosland. Director of the Chile Institute. After that it’s getting worse and worse. "The pepper is full of flavor and a great addition to BBQ sauce," he adds to this.

Pepperseeds.eu offers Moruga Scorpion for some time now with the text that not much was known about this possible hottest pepper. Up to now.

The champions of recent years: